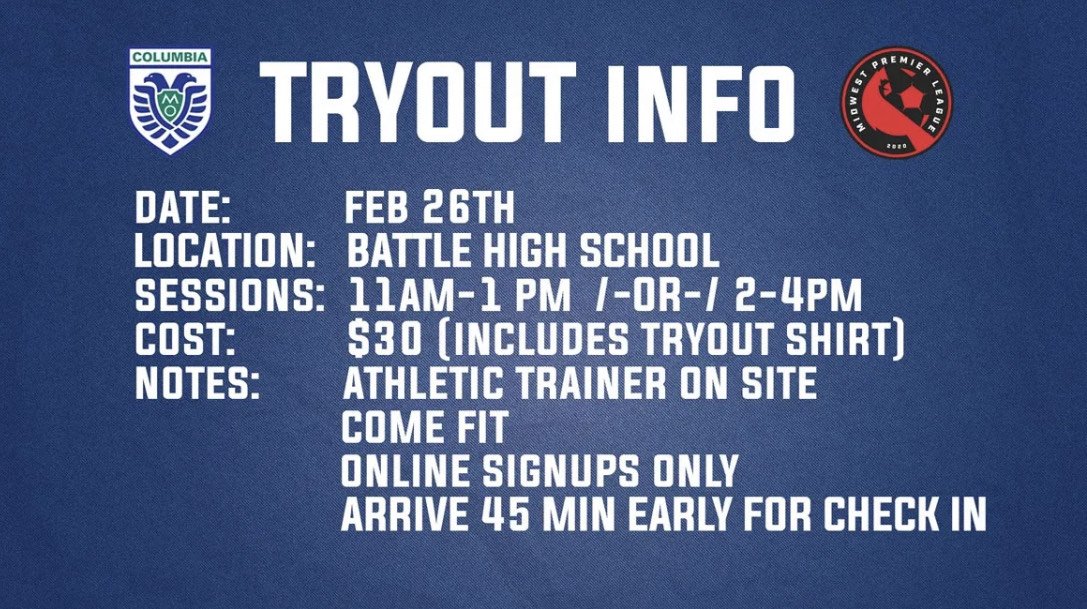 COLUMBIA, Mo. — AFC Columbia is hosting its first tryout session ahead of its historic inaugural season in the Midwest Premier League, an affiliate league of the professional National Independent Soccer Association (NISA). Matches will be played against teams from St. Louis, Kansas City and other regional cities.

The tryouts will be held Saturday and broken into two sessions, one starting at 11 a.m. and the other starting at 2 p.m. Both sessions will be two hours. Trialists have been asked to arrive 45 minutes prior to their session’s start time to get checked in.

The tryouts will be held at Battle High School and are open to the public. There will be an athletic trainer on site.

“We’re excited for this, it’s been two years of build up to this point,” AFCC President Zach Fisher said. “We’re excited to see a ball kicked for the regional team.

Selected players will represent AFC Columbia in league play, friendlies and potentially various tournaments. Players will learn if they have made the team in the days after the tryouts.

About 60 local players have signed up for tryouts ahead of the season, with the goal of having about 35 players selected for both the first team and a reserve team.

“We are expecting a wide range of high level talent from current local college starters to recent alumns and even some of the top local high school talent,” Fisher said.  “I’m excited to see players from places like Columbia College and CMU on the same team representing not only the city of Columbia, but all of Mid-Missouri.”

Players who play for the team will still have college eligibility.

Media will be allowed to cover the tryouts. If you or anyone with your outlet plans on covering the event, please email Anthony Kristensen at anthony.kristensen17@gmail.com or afccomo@gmail.com. For players, the link to the tryout form can be found here.