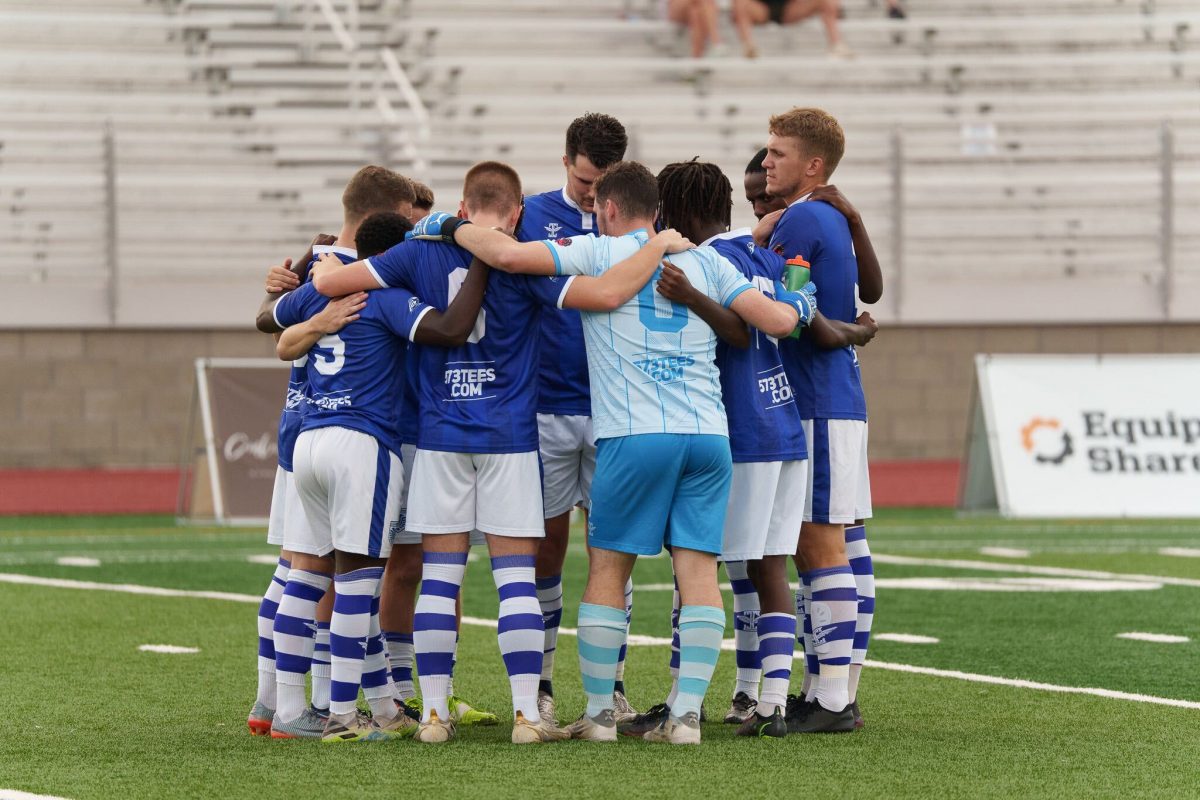 AFCC rounded out its first season in the Midwest Premier League (MWPL) with many milestones hit along the way.

Led by coaches Kurtis Boardsen and Brandon Russell, a fresh roster selected from the best college and young adult players in the Mid-Missouri area solidified, AFCC kicked off its first ever semipro match on April 30th, 2022 in a friendly on a cold, windy day in Kansas. Despite having limited training together, AFCC held Sunflower FC to a 1-1 draw, with an equalizer scored in the second half by captain, Elliott Goodwin.

After a lengthy spell set aside for team training and bonding, AFCC kicked off the MWPL with a tough away trip to Santa Fe Wanderers of Kansas City. The Eagles conceded three in this trying match, but were awarded the 3-0 win due to Santa Fe’s inability to register its players with the league prior to kickoff. AFCC earned its first 3 points here.

The Eagles hosted its first semipro match in Columbia at Battle High School on June 11, 2022 to a crowd of 247 people. They took on BOHFS, a newly formed club from St. Louis. AFCC faced its first challenge as they conceded an opening goal in the first half.

Pushing on, the team dominated the ball and created many great opportunities, but a momentary lapse in concentration lead to a late goal on the break as the team was pushing for an equalizer in the dying minutes of the second half. The score finished 0-2 to BOHFS despite amazing home support from the fans.

The second MWPL match saw AFCC travel away to Ajax St. Louis. This time, the newly introduced i70 Cup was on the line. In another hard fought match, the Eagles similarly dominated the match, playing an aggressive possession-based game, as they’d done against BOFHS. A fortunate deflection from a 30 yard set piece saw an Ajax man free in front of goal near the 30 minute mark, burying it home to lead Ajax St. Louis to a 1-0 home win. Ajax took him the trophy.

Following two straight defeats, the Eagles sought to get back to winning ways in an away fixture against SpringField FC. After a spectacular second half strike from Sam Allen, the match finished 1-0 to the Eagles. Another 3 points secured.

Setting a new home attendance record at 253, Ajax St. Louis returned to face AFCC in a bid for the club to take the i70 Cup from their St. Louis rivals. A tight match saw Ajax leave Columbia with an 0-1 win after a tidy first half finish allowed them to coast through the match. Ajax kept hold of the i70 Cup for 2022.

On a sweltering July day, the Eagles brought the heat vs Santa Fe Wanderers. After conceding early on, a swift 13′ strike from Michael Bhat brought the first home goal in AFC Columbia history and an equalizer. What followed was an epic battle, with Santa Fe closing out the half on top 1-3.

The lead didn’t last long though. AFCC’s #10 Tarnue Tyler brought the score to 2-3 early after the break. With momentum, the team pressed on, finally getting the equalizer with a cool finish from winger Freddy Nene. A draw was not enough for the Eagles. Marshall Dickson rounded out the match with a late, 88th minute winner. The match ended 4-3 with 3 more points secured.

AFCC ended the season in 2nd place, trailing a near perfect Ajax St. Louis by 3 points. With 12 points from 6 matches, the club concluded a strong first MWPL campaign.

Fresh off their thrilling home win, the team gave home fans a lot to cheer about as they welcomed Southeast Soccer Association (SESA) from Iowa. The first half saw AFCC notch home 6 goals, with a notable strike from striker Clay Faiman and a cooly taken PK from Bukuru. The match ended with one of the most spectacular scenes: goalkeeper Ryan Harriskitt got in on the act, coming on as a striker and scoring a looping, van Persie-like header. Final score: 8-0.

With 3 wins, 1 draw, and 3 losses on the season, AFCC made a solid entry into the semipro scene. The foundation is now set and coaches Kurtis Boardsen and Brandon Russell plan to aim for the top next season. The goal in 2023: win the Midwest Premier League title!